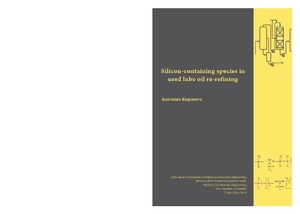 Nowadays, the re-refining of the used lube oils has gained worldwide a lot of attention due to the necessity for added environmental protection and increasingly stringent environmental legislation. One of the parameters determining the quality of the produced base oils is the composition of feedstock. Estimation of the chemical composition of the used oil collected from several European locations showed that the hydrocarbon structure of the motor oil is changed insignificantly during its operation and the major part of the changes is accounted for with depleted oil additives.
In the lube oil re-refining industry silicon, coming mainly from antifoaming agents, is recognized to be a contaminant generating undesired solid deposits in various locations in the re-refining units.
In this thesis, a particular attention was paid to the mechanism of solid product formation during the alkali treatment process of silicon-containing used lube oils. The transformations of a model siloxane, tetramethyldisiloxane (TMDS), were studied in a batch reactor at industrially relevant alkali treatment conditions (low temperature, short reaction time) using different alkali agents.
The reaction mechanism involving solid alkali metal silanolates was proposed. The experimental data obtained demonstrated that the solids were dominant products at low temperature and short reaction time. The liquid products in the low temperature reactions were represented mainly by linear siloxanes. The prolongation of reaction time resulted in reduction of solids, whereas both temperature and time increase led to dominance of cyclic products in the reaction mixture. Experiments with the varied reaction time demonstrated that the concentration of cyclic trimer being the dominant in the beginning of the reaction diminished with time, whereas the cyclic tetramer tended to increase. Experiments with lower sodium hydroxide concentration showed the same effect. In addition, a decrease of alkali agent concentration in the initial reaction mixture accelerated TMDS transformation reactions resulting in solely liquid cyclic siloxanes yields.
Comparison of sodium and potassium hydroxides applied as an alkali agent demonstrated that potassium hydroxide was more efficient, since the activation energy in KOH presence was almost 2-fold lower than that for sodium hydroxide containing reaction mixture. Application of potassium hydroxide for TMDS transformation at 100° C with 3 hours reaction time resulted in 20 % decrease of solid yields compared to NaOH-containing mixture. Moreover, TMDS transformations in the presence of sodium silanolate applied as an alkali agent led to formation of only liquid products without formation of the undesired solids.
On the basis of experimental data and the proposed reaction mechanism, a kinetic model was developed, which provided a satisfactory description of the experimental results.
Suitability of the selected siloxane as a relevant model of industrial silicon-containing compounds was verified by investigation of the commercially available antifoam agent in base-catalyzed conditions.