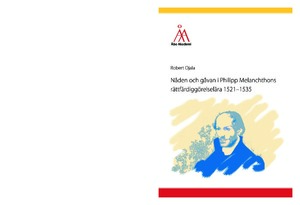 The fourth option is in my opinion the most preferable. The analysis of Melanchthon’s writings shows that he expects both a forensic, and an effective aspect in the doctrine of justification throughout the examined period. Melanchthon strongly emphasizes that justification is by grace alone through faith for Christ’s sake, but also that the Holy Spirit works the justifying faith, and is the gift bestowed on believers in connection with this. Where the opponents according to Melanchthon see deeds, virtues, or a quality in the believer as the cause of the justification, there Melanchthon sees only Christ.