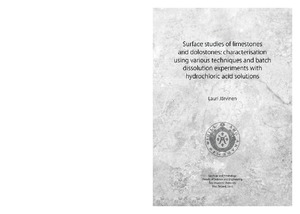 Järvinen, Lauri
Åbo Akademi University
This publication is copyrighted. You may download, display and print it for Your own personal use. Commercial use is prohibited.
Näytä kaikki kuvailutiedot
Julkaisun pysyvä osoite on
http://urn.fi/URN:NBN:fi-fe201501221242

In this thesis, stepwise titration with hydrochloric acid was used to obtain chemical reactivities and dissolution rates of ground limestones and dolostones of varying geological backgrounds (sedimentary, metamorphic or magmatic). Two different ways of conducting the calculations were used: 1) a first order mathematical model was used to calculate extrapolated initial reactivities (and dissolution rates) at pH 4, and 2) a second order mathematical model was used to acquire integrated mean specific chemical reaction constants (and dissolution rates) at pH 5. The calculations of the reactivities and dissolution rates were based on rate of change of pH and particle size distributions of the sample powders obtained by laser diffraction. The initial dissolution rates at pH 4 were repeatedly higher than previously reported literature values, whereas the dissolution rates at pH 5 were consistent with former observations. Reactivities and dissolution rates varied substantially for dolostones, whereas for limestones and calcareous rocks, the variation can be primarily explained by relatively large sample standard deviations. A list of the dolostone samples in a decreasing order of initial reactivity at pH 4 is:
1) metamorphic dolostones with calcite/dolomite ratio higher than about 6%
2) sedimentary dolostones without calcite
3) metamorphic dolostones with calcite/dolomite ratio lower than about 6%
The reactivities and dissolution rates were accompanied by a wide range of experimental techniques to characterise the samples, to reveal how different rocks changed during the dissolution process, and to find out which factors had an influence on their chemical reactivities. An emphasis was put on chemical and morphological changes taking place at the surfaces of the particles via X-ray Photoelectron Spectroscopy (XPS) and Scanning Electron Microscopy (SEM). Supporting chemical information was obtained with X-Ray Fluorescence (XRF) measurements of the samples, and Inductively Coupled Plasma-Mass Spectrometry (ICP-MS) and Inductively Coupled Plasma-Optical Emission Spectrometry (ICP-OES) measurements of the solutions used in the reactivity experiments. Information on mineral (modal) compositions and their occurrence was provided by X-Ray Diffraction (XRD), Energy Dispersive X-ray analysis (EDX) and studying thin sections with a petrographic microscope. BET (Brunauer, Emmet, Teller) surface areas were determined from nitrogen physisorption data. Factors increasing chemical reactivity of dolostones and calcareous rocks were found to be sedimentary origin, higher calcite concentration and smaller quartz concentration. Also, it is assumed that finer grain size and larger BET surface areas increase the reactivity although no certain correlation was found in this thesis. Atomic concentrations did not correlate with the reactivities. Sedimentary dolostones, unlike metamorphic ones, were found to have porous surface structures after dissolution.
In addition, conventional (XPS) and synchrotron based (HRXPS) X-ray Photoelectron Spectroscopy were used to study bonding environments on calcite and dolomite surfaces. Both samples are insulators, which is why neutralisation measures such as electron flood gun and a conductive mask were used. Surface core level shifts of 0.7 ± 0.1 eV for Ca 2p spectrum of calcite and 0.75 ± 0.05 eV for Mg 2p and Ca 3s spectra of dolomite were obtained. Some satellite features of Ca 2p, C 1s and O 1s spectra have been suggested to be bulk plasmons. The origin of carbide bonds was suggested to be beam assisted interaction with hydrocarbons found on the surface.
The results presented in this thesis are of particular importance for choosing raw materials for wet Flue Gas Desulphurisation (FGD) and construction industry. Wet FGD benefits from high reactivity, whereas construction industry can take advantage of slow reactivity of carbonate rocks often used in the facades of fine buildings. Information on chemical bonding environments may help to create more accurate models for water-rock interactions of carbonates.