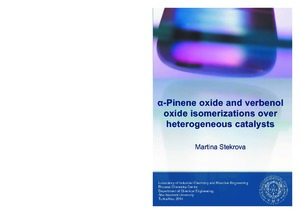 Terpenes are a valuable natural resource for the production of fine chemicals. Turpentine, obtained from biomass and also as a side product of softwood industry, is rich in monoterpenes such as α-pinene and β-pinene, which are widely used as raw materials in the synthesis of flavors, fragrances and pharmaceutical compounds. The rearrangement of their epoxides has been thoroughly studied in recent years, as a method to obtain compounds which are further used in the fine chemical industry. The industrially most desired products of α-pinene oxide isomerization are campholenic aldehyde and trans-carveol. Campholenic aldehyde is an intermediate for the manufacture of sandalwood-like fragrances such as santalol. Trans-carveol is an expensive constituent of the Valencia orange essence oil used in perfume bases and food flavor composition. Furthermore it has been found to exhibit chemoprevention of mammary carcinogenesis.
A wide range of iron and ceria supported catalysts were prepared, characterized and tested for α-pinene oxide isomerization in order to selective synthesis of above mentioned products.
The highest catalytic activity in the preparation of campholenic aldehyde over iron modified catalysts using toluene as a solvent at 70 °C (total conversion of α-pinene oxide with a selectivity of 66 % to the desired aldehyde) was achieved in the presence of Fe-MCM-41. Furthermore, Fe-MCM-41 catalyst was successfully regenerated without deterioration of catalytic activity and selectivity.
The most active catalysts in the synthesis of trans-carveol from α-pinene oxide over iron and ceria modified catalysts in N,N-dimethylacetamide as a solvent at 140 °C (total conversion of α-pinene oxide with selectivity 43 % to trans-carveol) were Fe-Beta-300 and Ce-Si-MCM-41. These catalysts were further tested for an analogous reaction, namely verbenol oxide isomerization.
Verbenone is another natural organic compound which can be found in a variety of plants or synthesized by allylic oxidation of α-pinene. An interesting product which is synthesized from verbenone is (1R,2R,6S)-3-methyl-6-(prop-1-en-2-yl)cyclohex-3-ene-1,2-diol. It has been discovered that this diol possesses potent anti-Parkinson activity. The most effective way leading to desired diol starts from verbenone and includes three stages: epoxidation of verbenone to verbenone oxide, reduction of verbenone oxide and subsequent isomerization of obtained verbenol oxide, which is analogous to isomerization of α-pinene oxide. In the research focused on the last step of these synthesis, high selectivity (82 %) to desired diol was achieved in the isomerization of verbenol oxide at a conversion level of 96 % in N,N-dimethylacetamide at 140 °C using iron modified zeolite, Fe-Beta-300. This reaction displayed surprisingly high selectivity, which has not been achieved yet. The possibility of the reuse of heterogeneous catalysts without activity loss was demonstrated.