The duality of tactical thought : a study of how Swedish land forces' commanders view tactics in irregular warfare 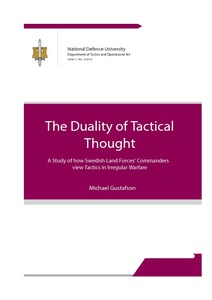 This is a sociological study of the views of officers in the Swedish Army and its
Amphibious Forces on tactics in Irregular Warfare (IW), in particular,
Counterinsurgency (COIN). IW comprises struggles, where the military weaker part
uses an indirect approach with smaller units and integrates the civilian and military
dimensions in a violence spectrum including subversion, terrorism, Guerrilla Warfare
and infantry actions. IW is the main armed warfare style in insurgencies. COIN is the
combined political, military, economic, social and legal actions in counter insurgencies.
Data has been collected by means of interviews with almost all (n =43) officers, who
were either commanding battalions or rifle and manoeuvre companies while undergoing
training for general warfare and international operations. The main theoretical and
methodological inspiration is the traditional one for research on social fields,
inaugurated by the French sociologist Pierre Bourdieu. The statistical technique used is
Multiple Correspondence Analysis. As a background and context base, an inquiry
inspired by the Begriffsgechichte (Conceptual History) tradition explores the genesis
and development of understandings of the term Irregular Warfare. The research question
is outlined as; “how can contemporary Swedish military thought on tactics in Irregular
Warfare be characterized using descriptive patterns, mapped in relation to background
factors and normative standards?
The most significant findings are that there are two main opposing notions separating
the officers’ views on tactics in Irregular Warfare: (1) a focus on larger, combat oriented
and collectively operating military units versus smaller and larger, more intelligence
oriented and dispersed operating units, and (2) a focus on military tasks and kinetic
effects versus military and civilian tasks as well as “soft” effects. The distribution of
these views can be presented as a two-dimensional space structured by the two axes.
This space represents four categories of tactics, partly diverging from normative
military standards for Counterinsurgency. This social space of standpoints shows
different structural tendencies for background factors of social and cultural character,
particularly dominant concerning military backgrounds, international mission
experiences and civilian education. Compared to military standards for
Counterinsurgency, the two tactical types characterized by a Regular Warfare mind-set
stands out as counter-normative.
Signs of creative thought on military practice and theory, as well as a still persistent
Regular Warfare doxa are apparent. Power struggles might thus develop, effecting the
transformation to a broadened warfare culture with an enhanced focus also on Irregular
Warfare. The result does not support research results arguing for a convergence of
military thought in the European transformation of Armed Forces. The main argument
goes beyond tactics and suggests sociological analysis on reciprocal effects regarding
strategy, operational art, tactics as well as leadership, concerning the mind-set and
preferences for Regular, Irregular and Hybrid Warfare.